Trying to tell my story and the tale of BriggateFarms from today’s perspective would have you all walking into the movie 30 minutes after it started. What got us to April 1,2020 is important yes. And that tale will be told. Tantamount is what we are doing today and what is in our sights for tomorrow, next week, next month and next year. Please pop some Popcorn, open a box of Ju-Ju’s and come along for the ride. Unlike sitting at the movies, this story encourages audience participation. If you see us heading into the cellar with a flashlight and a shovel on a stormy night, shout out, “Grab the Shotgun”.

Some backstory without spoiling the prequel: In 2014, circumstances dictated that I (Brian) move to Deep South Texas. BriggateFarms went into mothballs while I did what seemed to be the right thing. Friends and neighbors helped to keep the property from dropping into total decline. Yet, while the bare necessities were provided for, the non-essentials were not addressed. Six years is a long time and much needs to be done. The 2 months since returning to Briggate, we have beat back the weeds and reclaimed two of the flower beds. The diesel zero-turn tractor/mower is back in service. And a thumb has been added to the backhoe for extracting the invasive Cherokee Rose.

June will have us installing a Timber Framed structure to cover the East patio. Also in June, we will be clearing Privet and Cherokee Rose from the area that will be the chicken run. July will have us rebuilding the pump house and constructing a chicken coop. And as time allows we will begin to reclaim the patch that was the vegetable garden pre 2014. 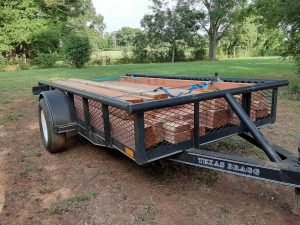 Moving and assembling on your own can be challenging. Here we see the process for…
Read More